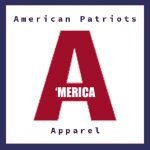 This Kyle Rittenhouse Hero Tee by American Patriots Apparel for Super Happy Fun America drives the point home that it isn’t illegal to exercise your 2nd Amendment in self-defense. Anyone who has watched the video of that night when Rittenhouse had a mob of people attacking him understands that self-defense is exactly what that was and that his intent was to essentially serve and protect the city and streets that were in danger of being overrun by left-wing terrorists who were Burning Looting and Murdering with Antifa. The truth matters and we must speak it. The truth is stopping mobs of communist sympathizers who are trying to destroy your cities is heroic. The damages done by Kyle to the perpetrators could have been avoided if they simply weren’t involved in their unlawful activities that was threatening the public. This shirt makes that statement. Buy yours today!

We are proud to be an American run, America founded and America operated business selling America themed apparel for the American Patriot in you!